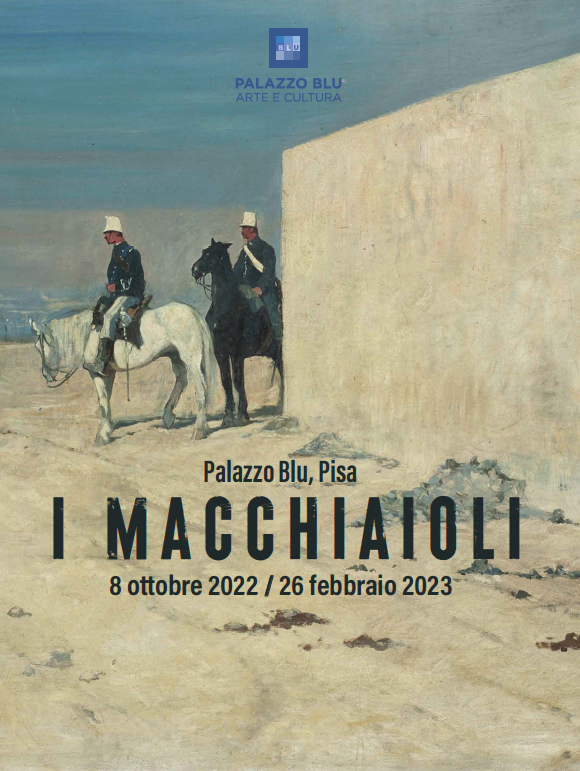 “The stain is the solidity of bodies in the face of light.”
Giovanni Fattori

“I MACCHIAIOLI” exhibition at Palazzo Blu in Pisa, from October 8, 2022 to February 26, 2023 – produced and organized by Fondazione Palazzo Blu and MondoMostre, with the contribution of Fondazione Pisa, curated by Francesca Dini, art historian and one of the most authoritative expert of this movement – traces the exciting evolution and revolution of Macchiaioli, who gave birth to one of the most original avant-garde in Europe in the second half of the nineteenth century.

It is in fact a retrospective of over 120 works, mostly masterpieces from private collections, usually inaccessible, and from important museum institutions such as the Uffizi Galleries in Florence, the “Leonardo da Vinci” National Museum of Science and Technology, Milan, the Gallery of Modern Art – Museums of Genoa Nervi and the National Gallery of Modern and Contemporary Art in Rome. The exhibition catalogue is published by Skira Editore.
This important pictorial movement became popular, reaching a wider audience, more than fifty years ago thanks to the now historical exhibition at Forte Belvedere in Florence. Much has been said and represented about the art of the Macchiaioli, without, however, ever being able to fully restore the international visibility it deserves. And this is mainly because the competition with French Impressionism set up as inescapable by the critics since the time of Roberto Longhi, has so far prevented a complete and autonomous reading of the Macchiaioli story.
Today more than ever, with nationalist visions having fallen in favor of a European and international outlook, we are more likely than ever to dilute the Franco-centric conception of the history of 19th century European painting and, without diminishing the universal scope of the Impressionist message, to highlight with greater objectivity the vital links of cultural dialogue between the peoples who contributed to the evolution of European civilization.  In this context, the vicissitudes of the Macchiaioli take on an even more interesting relevance, as does Tuscany, the chosen land of their artistic experience. These painters thus appear for what they actually were, that is, the key to an open, proactive, honest and daring dialogue with the most important artistic communities of Europe at the time.
The term “Macchiaioli” was coined in 1862 by a reviewer of Gazzetta del Popolo, which defined those painters who around 1855 had given rise to an anti-academic revival of Italian painting in a realist sense. The meaning of the term was obviously derogatory and played on a particular double meaning: in fact, to go into hiding means to act furtively, illegally.

The exhibition at Palazzo Blu, divided into 11 sections, tells the exciting adventure of a group of young progressive painters, Tuscan and otherwise, who – eager to distance themselves from the academic institution in which they were formed, under the influence of important masters of Romanticism as Giuseppe Bezzuoli and Francesco Hayez – soon came to write one of the most poetic and daring pages in the history of art, not only Italian. And it is precisely because of the universal values that underlie it that the art of the Macchiaioli is so relevant today, captivating with the formal and poetic fullness of extraordinary masterpieces – from Borrani’s “Cucitrici di camicie rosse” to Lega’s “Il canto di uno stornello” and Fattori’s “Battaglia di Magenta” – indelibly etched in the collective memory. The Macchiaioli’s intimate gaze on contemporary reality, their anti-heroic and profoundly human vision of the Risorgimento have also enchanted the world of cinema, from Luchino Visconti to Martin Scorsese. The exhibition at Palazzo Blu gathers together the “key” works of this path with the aim of marking the different moments of the Macchiaioli’s research, their confrontation with other artists and with the different European schools of painting; their bewilderments, their ability to collectively question themselves and to take, if necessary, the reins to continue along the road of progress and modernity without ever abandoning the main road of light. Visitors will find at Palazzo Blu the answers to the most recurrent questions: why were the Macchiaioli born in Tuscany? Can they be considered the painters of the Risorgimento? Why are they considered a European avant-garde.

Date della mostra
October 8, 2022 – February 26, 2023
Hours
Palazzo Blu will be open from Monday to Friday from 10am to 7pm On Saturdays, Sundays and holidays from 10am to 8pm

Audio guide
The audioguide is exclusively in digital format accessible on your smartphone and can be downloaded for free at the link: https://macchiaiolipisa.orpheo.app/

For better use and in respect of the visitors present in the exhibition we recommend bringing your earphones to use the radioguide. We would like to inform you that radio headsets are available for those who have booked a guided tour and are sanitized after each use. As an alternative, you can use your own earphones as long as they are not Bluetooth.

Register for Exhibition: I Macchiaioli

Your ticket for the: I Macchiaioli