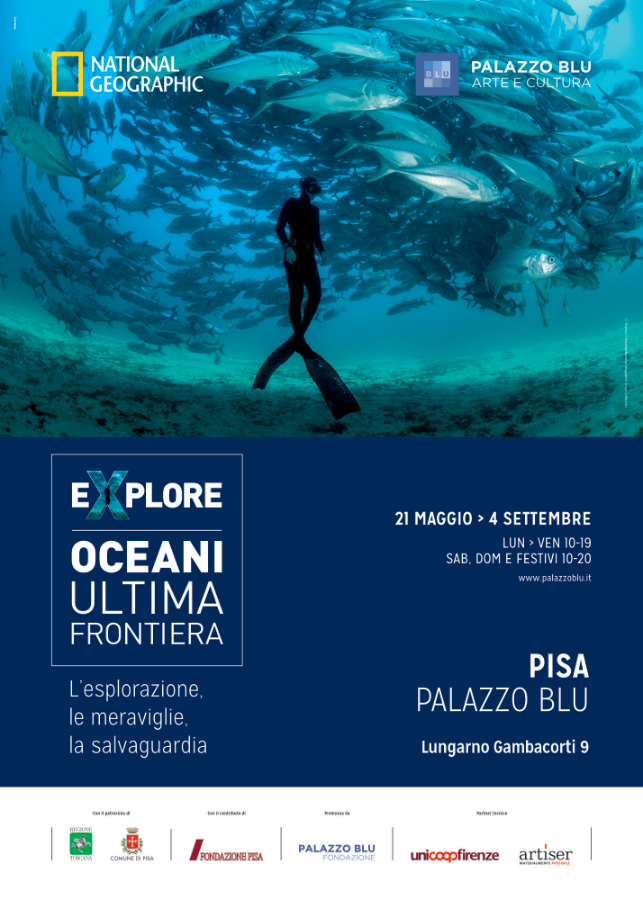 Oceans cover more than 70 percent of the Earth’s surface. So much so that one of the most famous photographs of Earth from space, taken in 1972 by astronauts on Apollo 17, the last mission of NASA’s lunar program, was nicknamed «The Blue Marble». This is what our planet looks like. If that were not enough, as further evidence of the importance of these vast expanses of water, according to one of the most accepted theories, life originated in the oceans.

Yet, we still know little of the oceans. We have sailed them far and wide in the age of navigation, but their depths still hide many secrets from us. Practically, thanks to the development of sophisticated diving technologies and photography, we only began to study and discover them in the mid-20th century.

Oceans, the Last Frontier is a photography exhibition dedicated to the exploration of the seas, from pioneers such as Jacques-Yves Cousteau and Sylvia Earle, National Geographic’s historic explorer and one of the first women to engage in oceanography, to more modern endeavors such as the discovery of the Titanic. We will encounter the most fascinating species of the deep, from giant marine mammals to the fiercest predators, but also seaweed carpets where fish go to breed and feed, and the colorful expanses of coral reefs. With a special section devoted to the inhabitants of our sea, the Mediterranean.

For the past few decades, however, the oceans have also been suffering from the impact of human activities. Several rooms are dedicated to three of the main problems of the oceans.

Climate change: warming waters and changing acidity are creating problems for marine wildlife. Shifts of tropical species to what used to be temperate latitudes, including in the Mediterranean, algal blooms of enormous proportions, as happening to the Sargasso region, bleaching of large areas of coral reefs, from the Maldives to Australia.

Overfishing: in recent decades, fishing has endangered some of the most important species in marine ecosystems, such as bluefin tuna. And it has decreased fish populations by as much as 75 percent.

Finally, plastic, the latest threat: we cast a glance at the large garbage patches, the plastic patches found in almost every latitude, but also the dangers to wildlife, from turtles to seabirds.

There is no shortage of positive messages, however, which also come from satellite images, which now allows us to keep tabs on the health of the oceans like never before. And finally, there’s National Geographic’s Pristine Seas project, which is making a decisive contribution to monitoring the most pristine areas of the planet, stimulating governments to protect them and contributing concretely with its missions to the 30X30 campaign, which aims to protect 30 percent of the surface of the oceans by 2030.

National Geographic
National Geographic Society is a globally operating nonprofit organization that uses the power of science, exploration, education and storytelling to enlighten and protect the wonders of our world. For more than 130 years, we have been documenting our extraordinary planet and everything in it. National Geographic chronicles the world’s adventures, cultures and most pristine places through exhibitions, experiences and live events designed for audiences of all ages. From large-scale, interactive photography exhibitions to smaller ones, National Geographic partners with national and international museums, science centers, universities and galleries to open a window to the world.
For more information about National Geographic exhibitions visit natgeo.org/exhibitions.

Your ticket for the: Explore.
Oceans, the last frontier